From much longer parody National Lampoon did of MAD. They were the new humor magazine in town with slick paper and ads and when they did parodies they looked like the real thing. 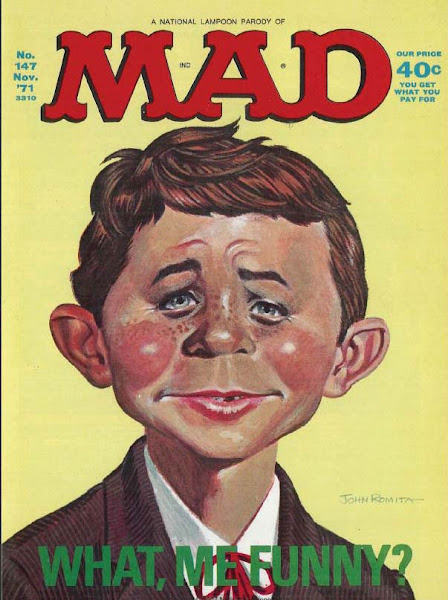 The premise was that MAD had its heyday when it was a 4-color comic in the 50s and since then had used the same formula over again. They used Marvel and Richie Rich artist Ernie Colon to duplicate the style of Mort Drucker.

Everybody knows the plot of Citizen Kane, even those who never saw it. Briefly, a newspaper magnate dies, his last words are “Rosebud”, reporters ask associates what it means, his life is told through their stories, they never find out, and as his possessions are being burned, the people responsible don't notice 'Rosebud' was written on a sled he had in his childhood.

The movie was loosely based on William Hearst. You know the story. Here the stand-in is MAD publisher William Gaines. 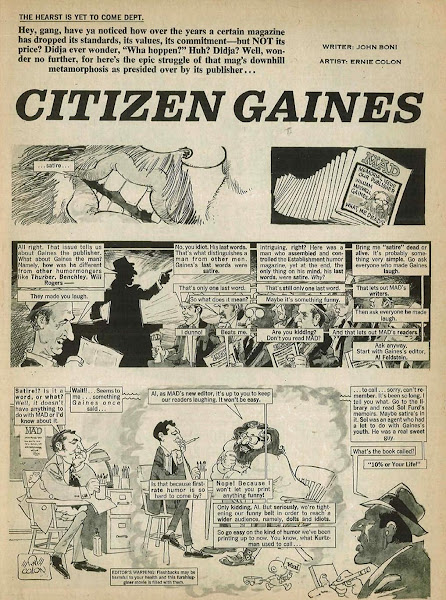 Al Feldstein was a real person even though Sol Furd wasn't.

The MAD office has caricatures of assistant editors Jerry DeFuccio and Nick Meglin, and art director John Putnam. Max Brandel was one of their writers but I have no idea what he looked like, nor do I know if the person talking to Richard Pryor was a MAD staffer. 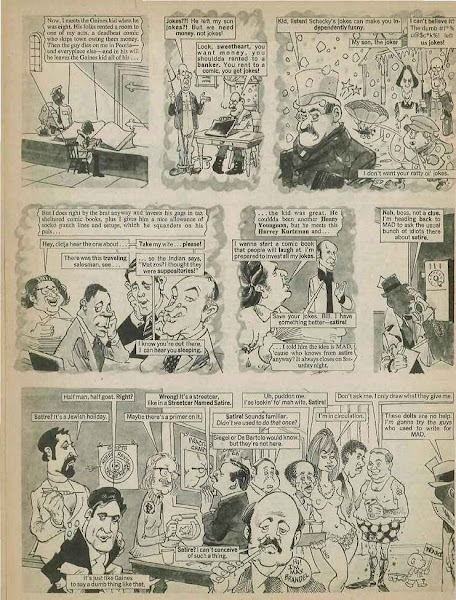 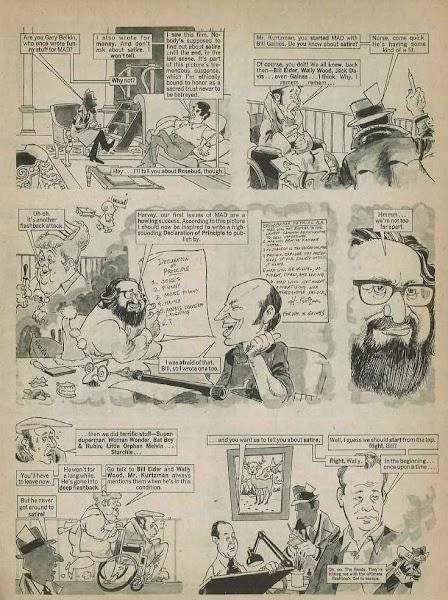 It's hard to read. Kurtzman's Declaration of Principles says:

1. MAD will not pander to the lowest common denominator.
2. MAD will provide first-rate material
3. No subject is too sacred for MAD.
4. MAD will explore the pretentions of our society until it hurts.
5. MAD will be original, impudent, and daring.
6. MAD will not accept advertising nor merchandise schlock. 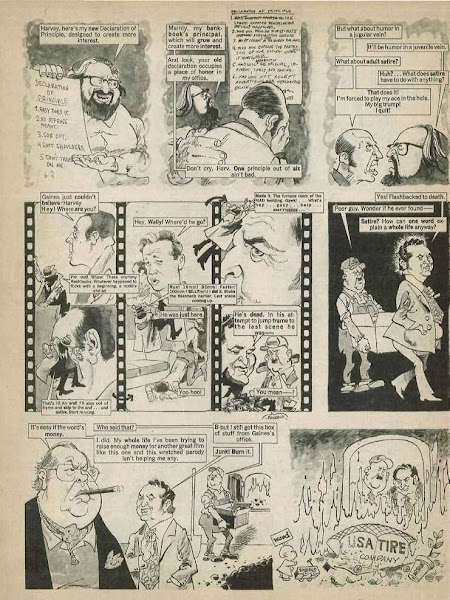 1. MAD will not pander to the lowest common denominator to sell magazines.
2. MAD will provide first-rate material. subscription service.
3. MNost subjects are is too sacred for MAD.
4. MAD will explore the pretentions of our society untilless it hurts.
5. MAD will apparently be original, impudent, and daring.
6. MAD will not accept advertising nor merchandise schlock.


This version of the Lighter Side in the MAD parody has always cracked me up. 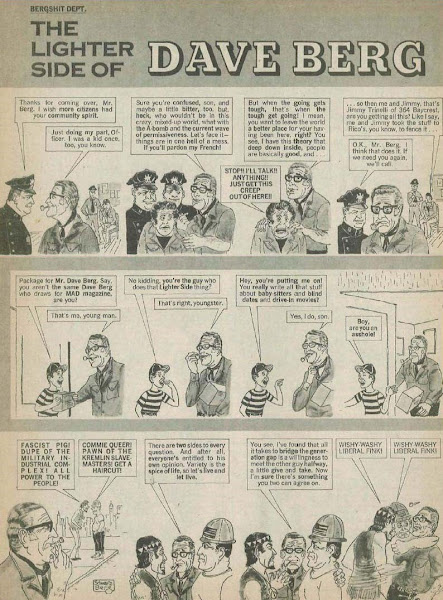 Writer Mark Evanier recalls this incident about his friend Dave Gibson and this strip:

“[...Gibson] will always be remembered for The Dave Berg Incident. This came about shortly after National Lampoon had done its famous parody of MAD magazine in its October, 1971 issue. [...]

“In the grand spirit of giving someone a taste of their own you-know-what, the NatLamp folks skewered MAD but good… and even the MAD staffers admired the effort. Some admitted the satire was dead-on and deserved. One of the most talked-about pages was the spoof/attack (take your pick) on Dave Berg, who did 'The Lighter Side of…' section for MAD. It was drawn by Stu Schwartzberg, a very funny gent who did some work for Marvel in the early seventies, occasionally contributing to their comics but mainly operating the world's smelliest photostat machine in the office.

“Dave Berg always drew himself into one or more of his cartoons. In the parody, a kid walks up to him and asks, 'Say, you aren't the same Dave Berg who draws for MAD magazine, are you?' Dave Berg says, 'That's me, young man.'

“The kid then says, 'Boy, are you an asshole!' Dave Berg reacts accordingly.

“Not nice but funny…especially if you recall how Berg manufactured his own, slightly-less-insulting punch lines. So a year or so after it comes out, we're all at one of the San Diego Comic-Cons. My memory is that this occurred at the '72 con, which was the first one at the El Cortez Hotel. I further recall that this took place in the waiting area of the Denny's restaurant just down the hill from that hotel. Gibson walks in with some friends and sees Dave Berg standing there. This gives Gibson an idea that he somehow thinks Mr. Berg will appreciate. He goes up to him and says, 'Say, you aren't the same Dave Berg who draws for MAD magazine, are you?' Dave Berg says, 'That's me, young man...'

“Gibson then asks, 'No kidding, you're the guy who does that Lighter Side thing?' Dave Berg says, 'That's right, youngster.'

“Gibson says, 'Hey, you're really putting me on! You really write all that stuff about baby-sitters and blind dates and drive-in movies?' Dave Berg proudly says, 'Yes, I do, son.'

“Gibson, pleased that Mr. Berg is playing along and following the script, then delivers the kicker. He says, clearly and loudly so all us onlookers can hear, 'Boy, are you an asshole!'

“There is silence. In fact, of all the silences I have heard in my life, this one most closely approximated the sound of floating adrift in deep outer space. It was finally broken only by the noise of Dave Berg sputtering and fuming and storming off.

No room for actors and directors

Stuff I feel the need to say

This is alphabetical (up to issue MAD #350) so I'm getting to ones you're thinking of. Be patient. I'm doing this in my spare time (which we unfortunately have a lot of for a while). Again, I must remind everyone this is a fan site and not at all associated with MAD or any of the other magazines I post excerpts from. The current copyright for many of the lesser-known magazines is often impossible to trace. The text is mine. No money changes hands and it's without anyone's permission. Think of it like cutting something out of a magazine and taping it to your refrigerator. So there.
Given the choice, I wouldn't add trigger warnings or disclaimers to unwoke things, but I know that's easy for me to say too. I don't think I should have to say things to other adults. I don't approve of punching down personally, but accept something is there, and don't believe showing it is condoning it. I'm in the minority, and I know if I don't say anything I'll never hear the end of it. Since all the material is 25-65 years old, it's not always written with the same values we have today. If you say you'd be as enlightened back then as you are now, you're lying.

I try to avoid politics here other than when it comes up in these parodies. There's so much everywhere else and you can't avoid it and I want this to be an oasis from that. Besides, my own politics and aesthetics don't quite line up, let alone with anyone else's.

The reason for a cutoff point is because this is basically a nostalgia site and I consider 25 years is a good cutoff point for that. Also because it's around when I stopped reading MAD.
Some of these entries are based on memories of watching something a few years ago. In some cases I can't track down the film or show to watch at all. I guess what I'm saying is I may be wrong sometimes. Don't feel bad about correcting me if I am. I'm only human. And feel free to mention any omissions (but not pre-emptively. Wait until I get past them in the alphabet. I will update entries as well.)
And you don't need hyperlinks. You can look up references you don't get yourselves. I over-explain too much as it is. You may say "yeah, I know that" but you'd be surprised how many people don't. Some people in their thirties don't even know who Groucho Marx or Bob Hope are. I even worked with someone once who didn't know that Reagan was once president. There are Zoomers reading this too.
Under Section 107 of the Copyright Act of 1976, allowance is made for FAIR USE for purposes such as criticism, comment, news reporting, teaching, scholarship, and research. Fair use is permitted by copyright statute that might otherwise be infringing. No copyright is claimed and to the extent that material may appear to be infringed, I assert that such alleged infringement is permissible under fair use principles in U.S. copyright laws. If you believe material has been used in an unauthorized manner, please contact me.

Note on the scans
Some art is taken from CDs or scans of the magazines. In most cases, I don't have the originals. If I had my preference, they would be better scans at a higher resolution. Don't blame me if they aren't. And sometimes things get cut off either the way they're printed or the way I receive them. Not my fault either.

The new Blogger layout is a pain in the ass making it so if you click on an image, it won't always be the size I posted depending on what kind of device you look at this on. You may have to right-click on it to open it in a new window. It will be clearer too.

LOOKING FOR SCANS OF:

86 - The Cornship of Oddie's Father
90 – Mockus Smellby, M.D.
- Underneath the Planet of the Apes

BLAST 1- Beneath the Dignity of the Apes

Just the movie and TV parodies in the above. Sorry I only have Cracked indexed. I have access to covers for all. Can't give money only because I don't make money myself and don't think anyone should be making money off others. You will be credited though.

Any of these that are in reprint collections will do as well. I have the other parodies in these issues.

I also want magazine illustrations (such as TV Guide) and movie posters for things that were illustrated by MAD artists if they were parodied by any of the humor magazines.

Special thanks to Michael Sullivan, Mark Arnold, Kevin Langtath, Doug Gilford, Daniel Frank, Justinman at archive.org, Comics For All, Heritage Auctions, Grand Comics Database, Comic Book Plus, and Read Comics Online for providing material and info. You too get a shoutout if you help.

Sam Henderson
SAM HENDERSON has been doing comics, illustration and writing popular among people aware of their existence since his birth, though he wasn't paid for it until 1991. In addition to his own series,The Magic Whistle, clients have included Nickelodeon, New York Press, DC Comics, Heavy Metal, New York Observer,and ...um... Screw. He was a storyboard director for SpongeBob Squarepants in 2001.
See what books are currently available, links to my own work and other web presences, or contact me by writing magicwhistle.henderson@gmail.com. Currently at work on graphic memoir titled Hail Seizure. Portrait by Jess Rullifson.